Someone recently suggested to me that it seems as though there have been more plane crashes than typical in recent months. I disagreed with this assessment, and said that one reason it seemed that way was because the crashes we’ve seen recently have been tragically salient.

Fortunately, only a couple of days after this conversation, I found a nifty little r function written by Phil Jette which scrapes a website that logs airline crashes. After obtaining the data, I thought I’d look to see if there was any support for the idea that there have been an inordinate number of crashes recently. Here’s a line graph by year: 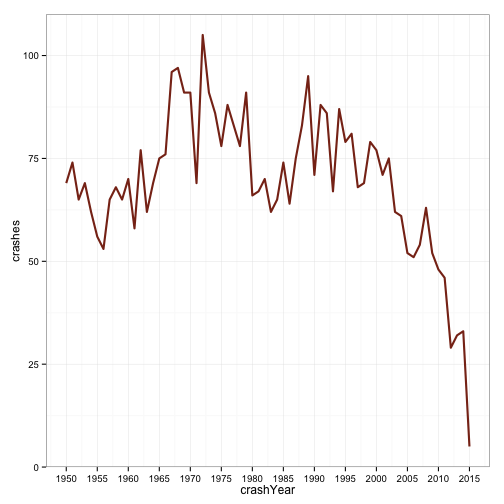 There’s still more of 2015 to go. What if we extrapolated through the end of the year, given how many crashes have been observed so far? Today is May 15th.

What proportion of the year is that?

Okay, so let’s extrapolate whatever number of crashes we’ve seen so far through the rest of the year and replot with the new value. 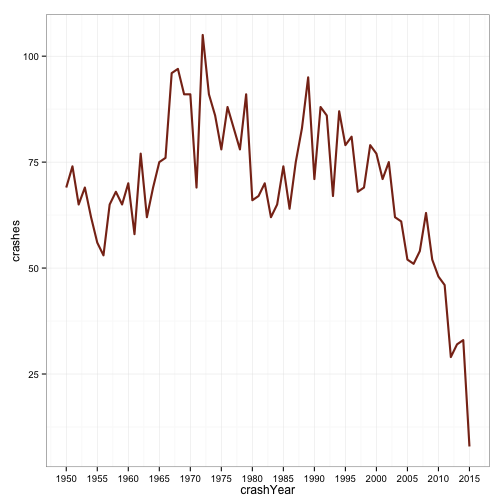 Caveats about the data source apply, but I think it’s safe to say that we’re not seeing a dramatic increase in plane crashes these days. Especially since all of this is just raw counts and doesn’t take into account the number of flights each year - something I’m sure is on an upward trajectory.